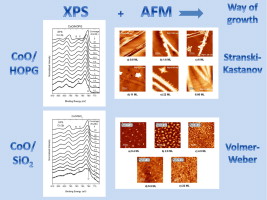 The growth of cobalt oxides by reactive thermal evaporation of metallic cobalt on highly oriented pyrolytic graphite (HOPG) and SiO2 (X cut quartz surface), in an oxygen atmosphere at room temperature, has been chemically and morphologically studied by means of X-ray photoelectron spectroscopy and atomic force microscopy. The chemical analysis, which also includes cluster calculations, reveals that for the early deposition stages on both substrates, Co2 + species are stabilized at the surface up to a coverage which depends on the substrate. Further coverages lead to the formation of the spinel oxide Co3O4. The results are discussed in terms of the dependence of the surface energy on the size of the CoO deposited moieties. On the other hand, it has been found that the initial way of growth of cobalt oxides on HOPG is of Stranski–Krastanov mode whereas on SiO2 the growth is of Volmer–Weber mode. The differences in the growth morphology have been discussed in terms of the surface diffusivity of the CoO deposits on the substrates.