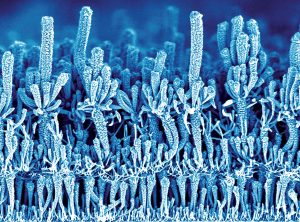 We present herein an evolved methodology for the growth of nanocrystalline hierarchical nanotubes combining physical vapor deposition of organic nanowires (ONWs) and plasma enhanced chemical vacuum deposition of anatase TiO2 layers. The ONWs act as vacuum removable 1D and 3D templates, with the whole process occurring at temperatures ranging from RT to 250 °C. As a result, a high density of hierarchical nanotubes with tunable diameter, length and tailored wall microstructures are formed on a variety of processable substrates as metal and metal oxide films or nanoparticles including transparent conductive oxides. The reiteration of the process leads to the development of an unprecedented 3D nanoarchitecture formed by stacking the layers of hierarchical TiO2 nanotubes. As a proof of concept, we present the superior performance of the 3D nanoarchitecture as a photoanode within an excitonic solar cell with efficiencies as high as 4.69% for a nominal thickness of the anatase layer below 2.75 μm. Mechanical stability and straightforward implementation in devices are demonstrated at the same time. The process is extendable to other functional oxides fabricated by plasma-assisted methods with readily available applications in energy harvesting and storage, catalysis and nanosensing.