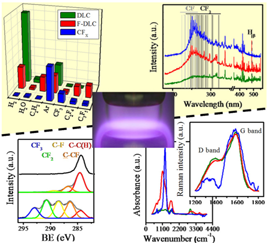 Highly fluorinated polymeric (CFX), fluorine containing diamond-like carbon (F-DLC) and, for comparison, diamond-like carbon (DLC) films have been plasma deposited in a RF parallel plate reactor by using c-C4F8 as fluorine precursor and different mixtures of argon, C2H2, and H2. Plasmas have been characterized by optical emission spectroscopy, mass spectrometry, and Langmuir probe measurements. Differences in the film composition and structure have been related with the type of species formed in the plasma and with the self-bias potential developed at the deposition electrode. Additional experiments using CF4 have confirmed that the formation in the plasmas of neutral or ionized CxFy species with x > 2 is a critical factor for the synthesis of fluorine rich films.